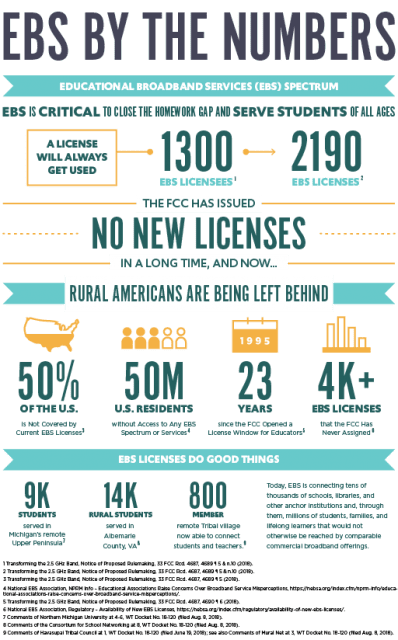 Yesterday, Mobile Citizen joined more than 800 groups in submitting a letter to the Federal Communications Commission (FCC) that voices strong support for keeping Educational Broadband Service (EBS) educational and licensing the unassigned EBS spectrum to educational institutions and Tribal Nations. The signatories include schools, nonprofits and other organizations dedicated to addressing the vast digital divide that many Americans face.

The letter emphasizes EBS as a critical tool for addressing the digital divide and the homework gap — two issues at the core of Mobile Citizen’s work.

It also explains that commercial carriers have proven they do not have the incentives to address these issues on their own. Despite having over 625 MHz of prime spectrum for wireless broadband deployment, there are still roughly 20 million Americans without broadband access. Putting more spectrum in commercial hands alone will not solve this problem.

This week’s sign-on letter demonstrates growing support for keeping EBS educational and for the FCC to finish licensing the band to educators. In addition to the organizations supporting this letter, a group of 57 operators voiced support to the FCC for these same principles.

The FCC is expected to propose final rules for EBS sometime this summer. To learn more, read the official press announcement here.